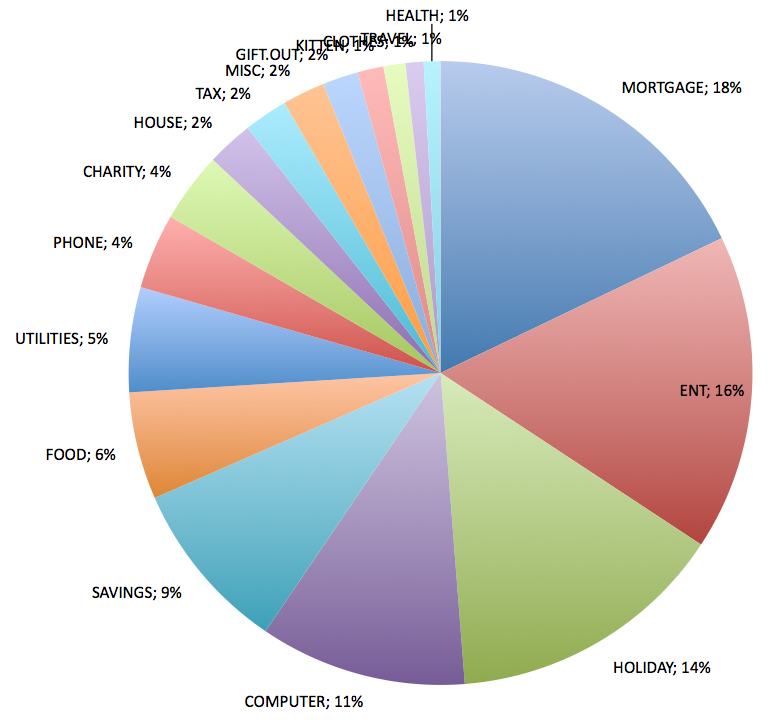 "Tax" appears tiny because this is made from the spreadsheet of transactions on my bank account, and income tax gets deducted before the money gets to the bank account, so it's only council tax. The TV license counts as a utility. Babbage the kitten (who I think will become 'CAT' on next year's pie chart) required quite expensive dentistry this year. 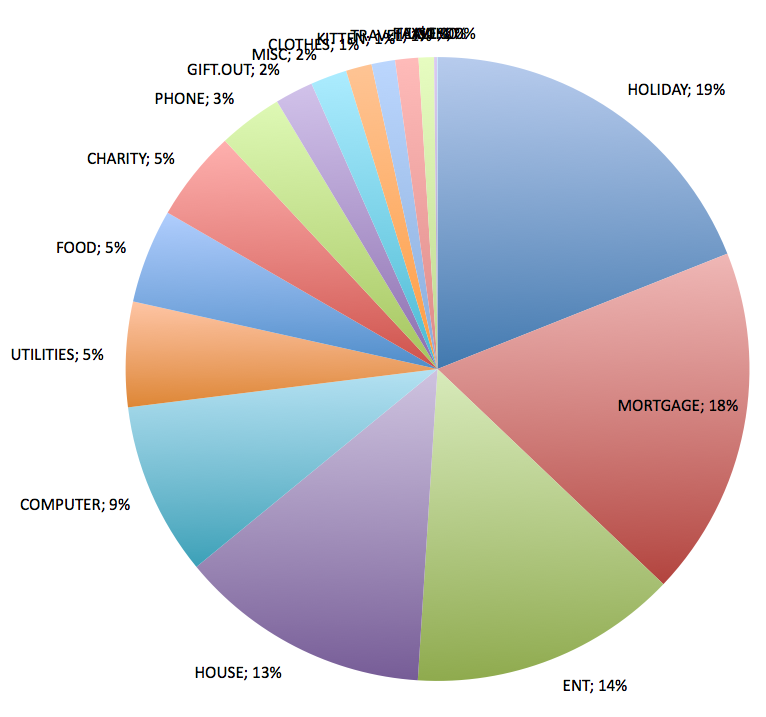 It was an odd-numbered year so I bought several computers; I bought an elaborate telephoto lens, a new giant pink iPhone, and a couple of pieces of beautiful art at Eastercon; I had quite a lot of work done to the house, and I have paid in full in advance for a very exciting holiday in March 2016, going to a small island fifty minutes by puddle-jumper from Manado (which is the capital of North Sulawesi province in Indonesia, three hours by A320 from Singapore) to see the total eclipse of the sun.

The partially- and totally-eclipsed moons do not in any useful respect resemble a duck. Which is a pity, since I know that I have the kit to take quite good pictures of ducks.

( Photos below may be a bit wide for your friends-pageCollapse )

Open to: All, detailed results viewable to: All. Participants: 23

These are all from my recent trip to the mountains near Cortina d'Ampezzo; I took the top one, the other three were taken by other people on the trip, one of whom was a designer from Dyson with a fancy retro camera (Fuji X100S) and a really good eye. You will already have seen them on my Facebook but I appreciate some people do not Facebook. 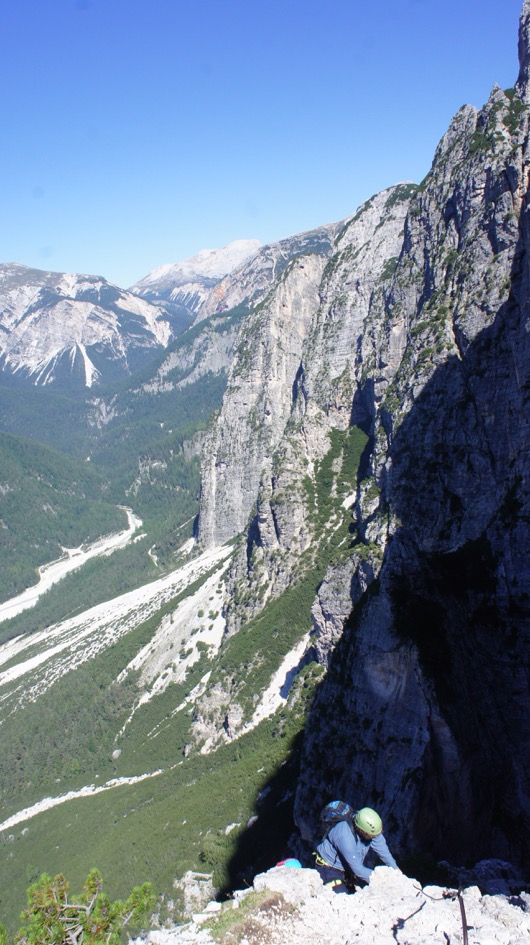 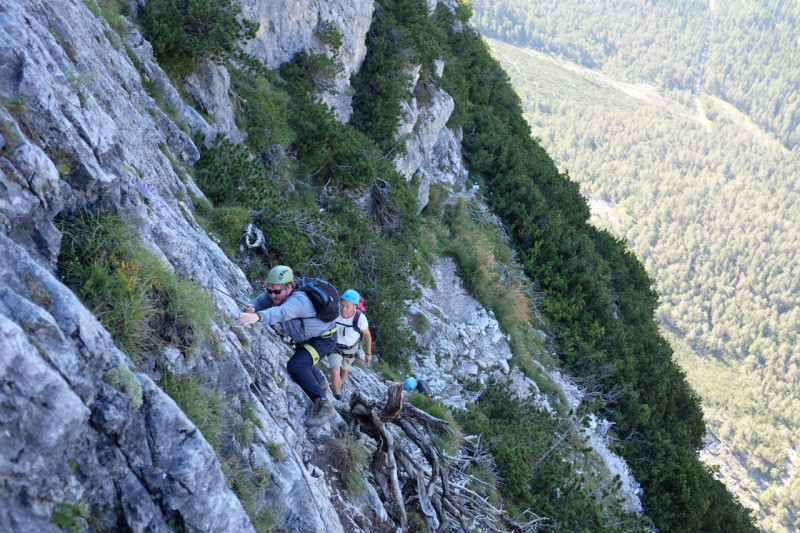 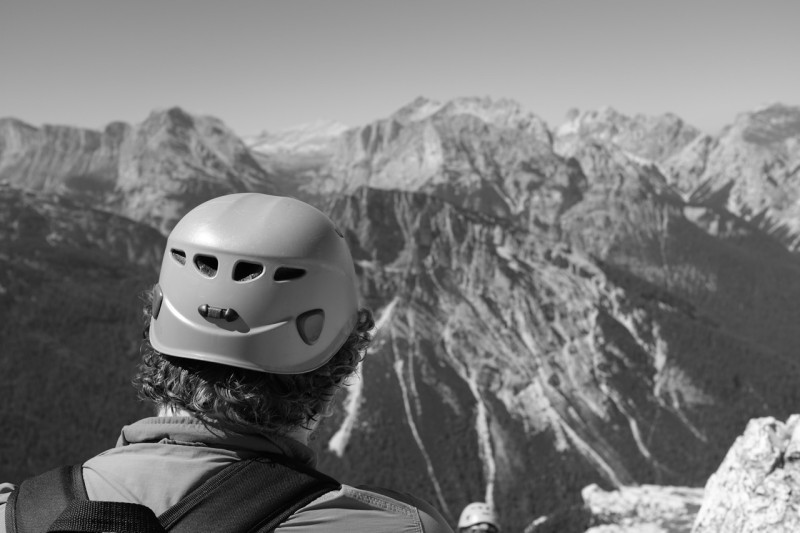 I know several of my friends are coming over to Amsterdam for this; I've been to it today and might as well report.

First observation: the ship switches to Dutch time at about midnight, Dutch time is an hour ahead of UK time, and so you may be perturbed when the unsilenceable speaker in the cabin ceiling announces at a time you believe to be 5:30 that we will be landing in 90 minutes.

The event is behind the central station and thoroughly signposted from within the station.

The main area, with the tall ships you can visit, is the 'orange route'. This goes round two long sides and one short side of the old docks, it's a five-mile walk, and as far as I can tell at the end you have to retrace your footsteps five miles back to Amaterdam Central Station. Two of the more exciting attractions - the modern submarine Bruinvis and the current Dutch Navy flagship de Rutyers - are right at the far end. The submarine stops accepting visitors at 4pm, the flagship at 4:30; today I missed both.

You might be better off taking a tour of the ships from the water: you can buy a timed e-ticket from www.ntk.nl under 'sail', it's €20 for adults, €10 for children, €0 for small children. This tour puts you in the procession of ships that go round the dock: if you're walking, the walk goes clockwise and the procession goes clockwise and so often you'll keep up with the same processing boat for some time.

The first couple of visitable ships have long queues, the queues are much shorter for later ones. I would recommend the Ecuadorian ship Guayas, the enormous Staatsraad Lemkuh, and (on the second half of the circuit) the small but perfectly-formed Australian Young Endeavour, the unpronounceable Polish Dar Młodzieży, and right at the end the French Belem which used to be the private yacht of the Duke of Westminster and later of the Guinness dynasty. The Chilean Esmerelada is so near the start as to have a long queue, and has a slightly unreconstructed tone to it with "Victory or Death" and "la razon o la fuerza" mottos everywhere.

Bring loads of water: if you can, bring a picnic. There are loads of food and drink stalls, but the standard pricing is €2.50 for a small drink.

This is another spiral galaxy, just short of edge-on to us, with a very prettily-placed band of dust in the plane of the galaxy - you can see that the nucleus is on the top side.

Tends to be called the Sombrero galaxy. Combination (using software I've just written) of five 90-second exposures; the purple colour cast is an artefact of pulling the levels up to show the faintest stars. 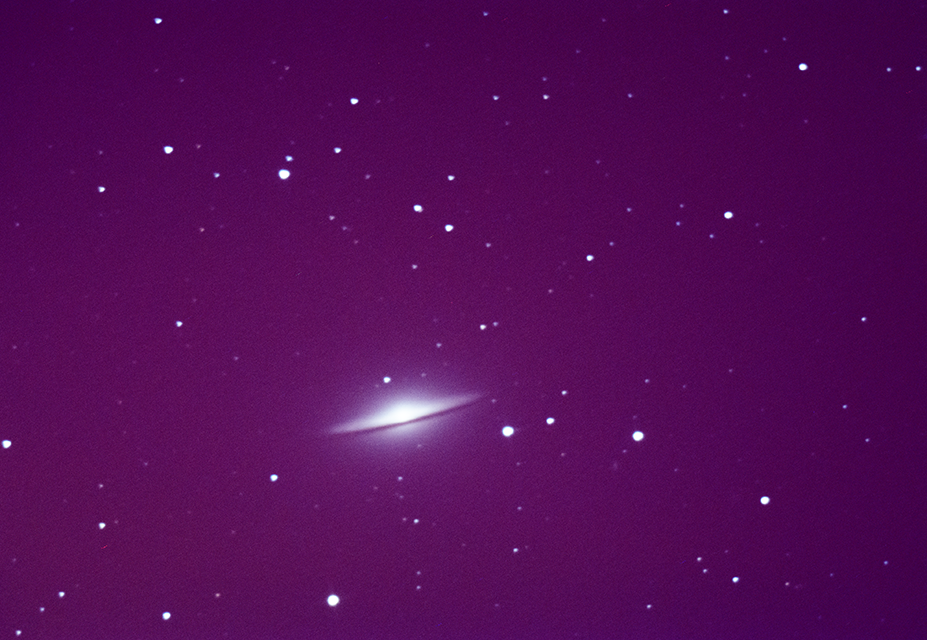 This is a starburst galaxy in Ursa Major; it's a spiral galaxy, viewed edge-on, with an enormous cloud of dust in front of it.

Sum of two 90-second exposures at ISO 1600 with 2250mm-focal-length f/4.5 giant telescope; I took five, but for three of them the wind was blowing hard enough to disrupt the telescope guiding and distort the bright stars into unusably strange shapes.

The apparently odd-shaped star in the top left is HD85161, which does have a companion star in the position that appears on this picture. It's surprisingly hard to find on-line star catalogues comprehensive enough to tell me how bright the faintest stars appearing in this picture are; ones which are over-exposed to the point of saturating at the centre are around magnitude eleven (IE a hundred times too faint to be seen with the naked eye), which makes sense since the big telescope collects about ten thousand times as much light as the naked eye does. 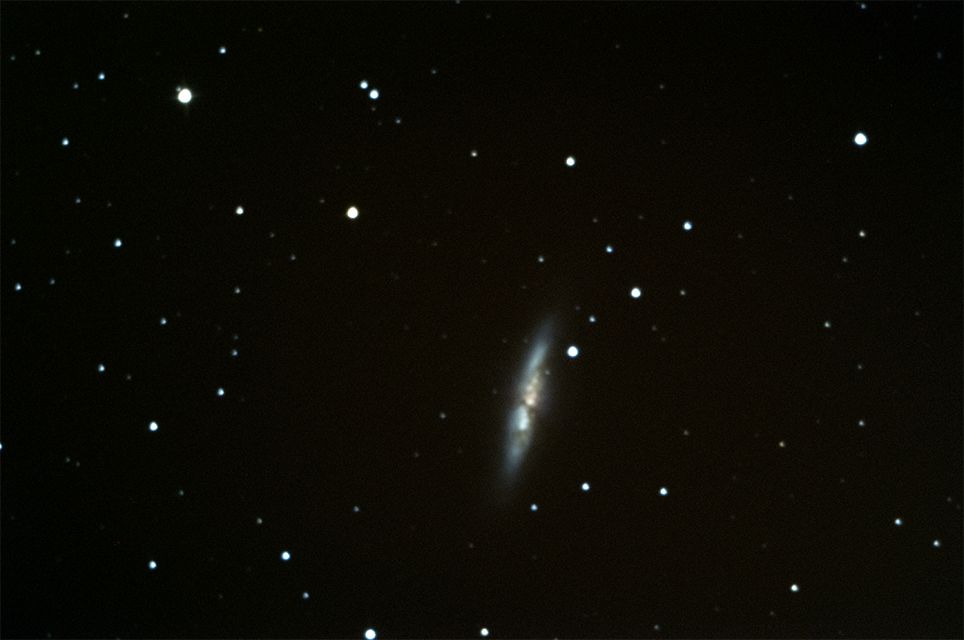 This is the twenty-inch Newtonian reflector at the Centre for Observational Astronomy in the Algarve, where I have just spent five nights 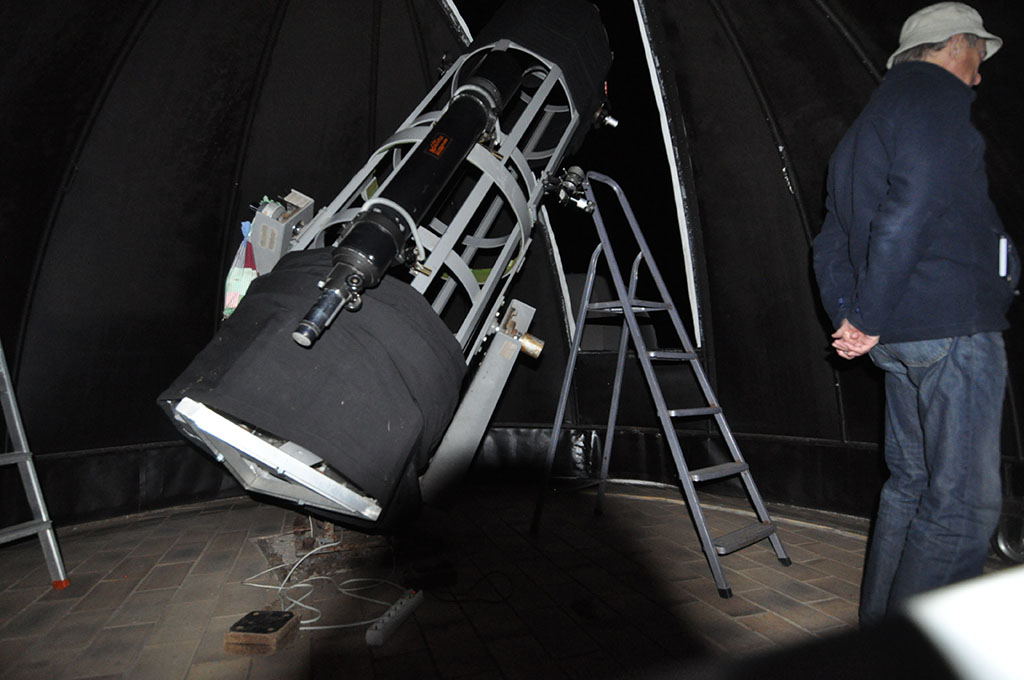 And this is roughly what you get if you point it into the middle of the Virgo galaxy cluster, attach my nice camera, leave the shutter open for 90 seconds at ISO1600, and tidy up a bit in Photoshop afterwards. 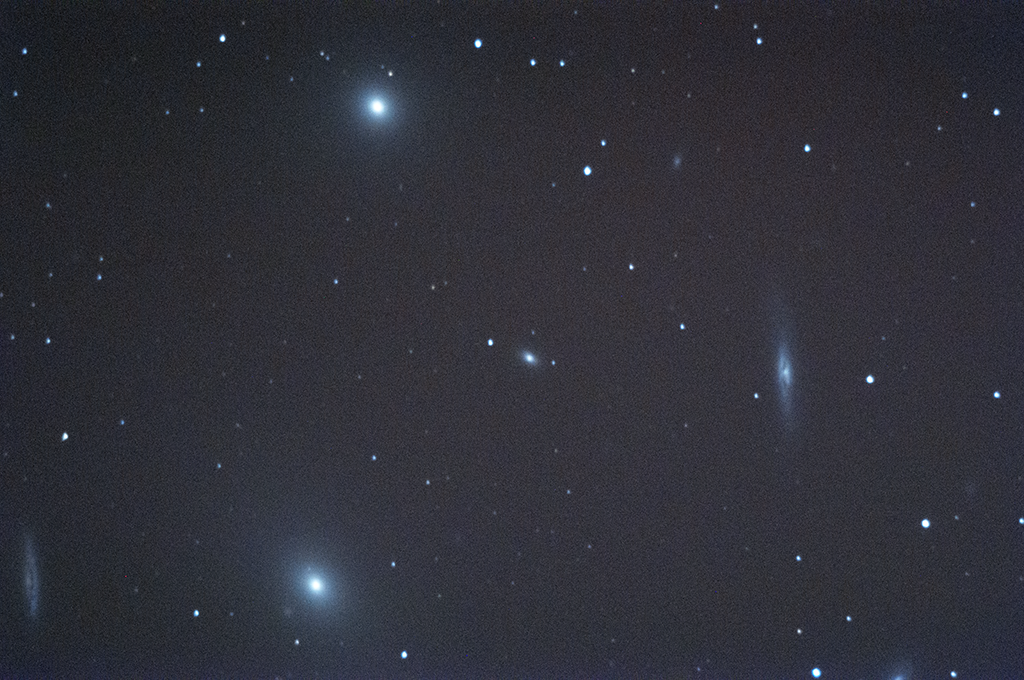 I think there are six and a half galaxies visible here; M84 and M86 are the big ellipticals top and bottom respectively, NGC4387 is the little one in the middle, NGC4388 is the interestingly-shaped one on the right, NGC4402 is the dim fuzzy one on the bottom left, IC3303 is the teeny faint one you get to if you start at M86, go to 4387 and keep going, NGC4413 is the half-cut-off one right at the bottom on the right. I'm not at all sure what the name of the tiny companion galaxy about a centimetre at clock-7:30 from M86 is.

The total amount Race For Life has ever raised would pay the NHS's drugs bill for a fortnight.

The total amount ever raised by the Disaster Emergency Committee is about a month's budget for the DFID.

Those are the kind of statistics it's worth having in mind when listening to talk of the Big Society; replacing single specialised pieces of taxpayer funding would require initiatives as big as the biggest ones we have. There's not the slightest hope of reliably getting three times as much donated annually to the task of funding the library service as was donated to the relief efforts for the 2004 tsunami, and that's what libraries in the UK cost.
Collapse